Monday Night Raw Superstar, Seth Rollins, has always been vocal about WWE. He is usually a big advocate for the promotion and regularly praises how it is being ran. However, in a recent report Rollins has said that there are improvements to be made within the promotion and that they should be doing better. 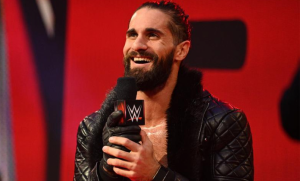 In a recent interview with Bleacher Report Rollins was asked about what WWE could be doing better. The short answer is that everything needs fixed. He elaborated and said that the company, talent, writers and communication all need to be improved.

“Not just the company, but myself, the talent around me, everyone in the back, the writers, the consistency, the conversations, the communication, everything could be better. It’s so hard to pick just one thing and say, ‘Ah, that’s going to be the ticket, that’s going to do it.’ It’s a work in progress, and I think going out there and consistently doing your job the best you can and helping other people out would be the best way to move this thing forward.”

Rollins is in the middle of a program with the Mysterio family. He is currently scheduled to face Dominik Mysterio at SummerSlam in a Street Fight. Dominik will be looking to get revenge on the ‘Monday night Messiah’ after he extracted his father, Rey Mysterio’s eye at the Horror Show at Extreme Rules.

With the reports today of WWE Thunderdome being planned for live shows, which will include a virtual crowd, pyrotechnics, lasers and drome cameras to name a few, Vince McMahon is going all out to make some of the improvements Seth Rollins touches on within his interview.