Back in April, at the start of the spread of COVID-19, Vince McMahon released a number of WWE stars and background staff to ensure e still made a record profit for the year. One of the released stars has confirmed that the company contacted him to return at recent pay per view Extreme rules. 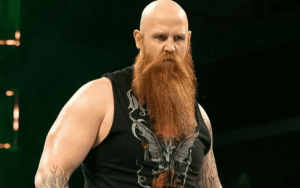 In a recent interview with Sportskeeda, Erick Rowan explained that he had been asked to come back to the company and make an appearance in the Swamp Match between Bray Wyatt and Braun Strowman.

Rowan had to decline the offer because he was in the middle of recording a movie at the time of the event.

When all the releases were being named back in April, Rowan was one of the most surprising ones. It seemed that WWE had plans for him at the time. He was involved in a lot of squash matches and was weirdly carrying around a secret cage. The mystery object turned out to be a big fake spider, which ended up being killed by Drew McIntyre.

Rowan was an original member of the Wyatt family alongside Bray, Braun Strowman and Harper Lee, this explains why WWE would have wanted Rowan there. One question we must ask is do you think Rowan would have made an appearance if he wasn’t otherwise engaged?