Just over a month ago WWE released in-ring talent and backstage staff from their contracts. The only female main roster talent to be released from the company was Sarah Logan. 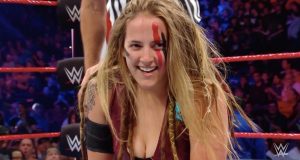 Logan, of the Riott Squad Faction did not go quietly. It was reported after her release that many members of the roster went to management to bat for her, including her real-life husband Erik of The Viking Raiders. Logan was backstage at the Raw taping after her release, despite not being featured on the show in any capacity.

As such, many fans have assumed that Logan will be re-joining WWE in the coming months, but it does not appear as if this is the case anymore.

Logan spoke for the first time since her release on the debut episode of her Wild and Free TV series on YouTube, revealing that she is considering transitioning into MMA.

Logan revealed that from the day she was released, she has been intensely training for an MMA fight. We can presume that Logan is finished with professional wrestling for the time being:

“The day I got released, I wrote a coach here in Cleveland that Ray knows and I was like ‘I want to fight.’ I’ve been training since that day”.