Renee Young took to Twitter today to inform us that she will make a “big fat announcement” on Wednesday. Young revealed that she is happy, meaning that we can expect some positive news instead of anything to do with her COVID diagnosis.

Hey y’all!! I’m so so happy, I have a big fat announcement for everyone on Wednesday! 😋

Some of Young’s followers have different theories about the announcement with one saying, ‘she’s pregnant’ while others hope that she is ‘leaving WWE for AEW’. 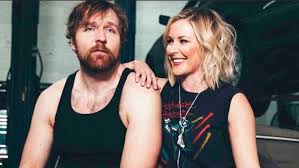 Young’s husband Jon Moxley is the World Champion of All Elite Wrestling which has always led to speculation that she might join the rival company someday. The fact that it is being reported that WWE are unhappy with her going public with her positive test result may have been the final reason for her to move promotions.

Moxley has not tested positive for Coronavirus and is still expected to appear at Fyter Fest on July 8th. The world champion has had to sit out of the last few recordings after it was confirmed that Young had tested positive.

On Twitter one of Moxley’s fans suggested that the news could be about Young starting a new Podcast which makes sense with her main job being an interviewer. With other WWE stars creating their own shows such as Corey Graves and The New Day is is not hard to imagine Young Staring her own online talk show. The fact that WWE Backstage has been cancelled by Fox she will be looking for her new venture to keep herself busy.