AEW’s Double or nothing was not just an amazing pay per view packed with creative wrestling, shock title wins and exciting action, but after a tough week in the wrestling world it was a much-needed distraction.

In the week leading up the pay per view, the heartbreaking news broke of two tragic deaths within the wrestling world. Stardom wrestler Hana Kimura and long-time wrestling journalist Larry Csonka passed away in the same week that former WWE Superstar Shad Gaspard drowned.

Although we are sure there was no offence intended by All Elite Wrestling, it had been noted that friends and family of Shad Gaspard were unhappy with a particular segment in Saturdays main event. 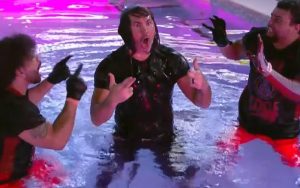 During the Stadium Stampede match between The Elite and The Inner Circle, Santana and Ortiz attempted to drown Matt Hardy a swimming pool within the stadium. Considering Gaspard drowned a few days before trying to save his son, people he knew are said to feel uncomfortable watching the spot.

Dave Meltzer wrote in the latest Wrestling News Observer that Gaspard’s friends told him the felt ‘uneasy’ when watching Double or Nothing and seeing someone getting drowned.

“There was a scene where they showed Hardy’s lifeless body and even though it was comedy for another resurrection, I can say that this particular scene was one that at least some friends of Gaspard did find uneasy because they told me that themselves.”

The Stadium stampede match was a cinematic event that was filmed a few days before it was aired. As mentioned, we are sure there was no ill-will on AEW’s part, but it is something that possibly should have been removed during editing.