Shawn Michaels and The Undertaker have provided us with so many memorable matches. It has been well documented however that although the wrestling legends have entertained us in many WrestleMania moments, the duo are not the best of friends out of the ring.

The undertaker has recently released the amazing Last Ride documentary series. On order to promote this many wrestling legends have been speaking to the media to promote this. HBK is one of those who have been opening up about his relationship with the Deadman outside of the ring. 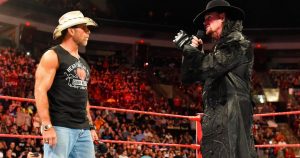 Shawn Michaels spoke to ESPN about how he did not get on with Mark Calaway outside of the ring when the pair were much younger. Despite have undeniable chemistry inside the ring they never managed to get along off screen.

“I think in some ways, when we were younger, we were frustrated because we had so much unbelievable natural chemistry in the ring with each other, and had zero of it outside the ring,” Michaels said. “At the time, I was an extremely difficult person. He was less so. There was clearly never any real trouble between the two of us. We just did not care for one another because we were so different. He clearly didn’t like me based on who I was and my reputation. And I didn’t like him based on who he was.”

The Undertaker and Shawn Michaels are said to be very different people now and have both buried the hatchet and reconciled their differences. Shawn’s last two matches have both involved The Undertaker, with his final match in 2018 seeing DX take on The Brothers of Destruction in a frankly unwatchable bout in Saudi Arabia.