In last night’s episode of Friday Night SmackDown, there was a very bizarre segment during the show. One of the stars involved made a very interesting point about it on social media.

During the show Naomi, Lacy Evans, Tamina and Dana Brooke took part in a weird karaoke contest which was hosted by Jey Uso. The segment was odd and no explanation was given as to why it happened. 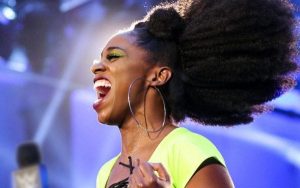 After the show a fan posted a comment on Naomi’s Instagram to say that they would rather have seen the four women wrestle. The former Smackdown Women’s Champion had an unusual reply:

Naomi won the singing contest which seems to have turned Lacy Evans heel again. Evans got a bit annoyed at Naomi winning and a brawl broke out between the women. This led to an official match between Lacy and Naomi but was interrupted by Tamina and Brooke which caused it to be stopped.

It has also been reported that Naomi singing Dusty Rhodes entrance music ‘Common Man’ was done as an intentional shot at Cody Rhodes by WWE.