In a recent interview with ComicBook.com, WWE star Cesaro told them that he “felt lost when The Bar broke up and he lost his Tag Team partner Sheamus. 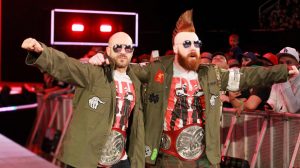 The SmackDown star has since joined alliances with Shinsuke Nakamura and Sami Zayn. Cesaro split from his former partner shortly after WrestleMania 35. He now admits that he has struggled to find his own identity after such a successful pairing with the Irishman.

The Swiss Superstar said that he has tried new outfits, wrestling moves and even new entrance music before realising that the tag of “wrestling purist” fit him best. He thinks that experimenting, adapting and changing has helped him find himself again.

Cesaro is well know for being overlooked within WWE when it comes to singles success however, he asked fans to be patient and that his time would come. He also believes that trying to push for something new does not do him or anyone else any favours.

“They always want to find who the new big guy is or who the new chosen one is. How can I jump on the bandwagon before everybody else?”.

It was not just Cesaro who was gutted when The Bar broke up, they were big fan favourites, audiences loved to see the chemistry between the two. Hopefully, WWE creative team have something good coming up for Cesaro, it’s a shame he is so underutilised.