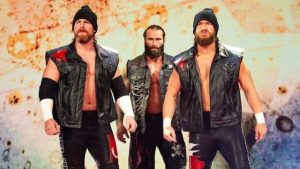 A few days after WrestleMania 36, On Friday Night Smackdown. NXT faction The Forgotten Sons debuted on the main roster. While many did not see this call-up coming, it makes sense as the group feels like it is better suited to the main roster.

Jaxson Ryker, the trio’s leader, has taken to social media to reveal that someone has unfortunately stolen one of the jackets he has worn on TV.

The Superstar who was known in TNA as ‘Gunner’ has said that he is offering a reward for the person who finds and returns his jacket.

The Forgotten Sons, made up of Ryker, Wesley Blake and Steve Cutler will be competing in tag team competition, their first on the main roster, against New Day on this week’s episode of Friday Night SmackDown.

It was not revealed which two members of the group will be in action. However, if they are presented in the same way as they were in NXT, it will most likely be Blake and Cutler taking on the SmackDown Tag Team Champions in a non-title match.