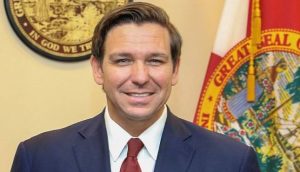 There could be fans returning to pro wrestling sooner than previously anticipated. Florida Governor Ron DeSantis has revealed his new guidelines for the state of Florida. Some of it affects both WWE and AEW shows.

Florida States new guidelines indicate that sporting events can once again welcome their fans as soon next week. However, they must continue to practice social distancing guidelines and taking up no more than 25 percent of the buildings capacity.

“Large spectator sporting events should use strict social distancing guidelines and limit
occupancy of venues to 25 percent of building capacity.”

Information on the Phased return can be found here

This would appear to include WWE and AEW, who have both been running empty arena shows since the pandemic began.

Both companies have pay per views on the horizon. WWE is building towards Money in the Bank on May 10 and AEW is heading towards Double or Nothing on May 23. The Money in the Bank ladder matches will be taking place at WWE Headquarters culminating on a roof top match. It is still unclear where the rest of the card will be held. Double or Nothing is in the same position, as a venue has not been announced for the show.

In theory, both companies could allow fans to be in attendance for their pay per views. Whether this will prove to be an effective or safe way of moving forward is yet to be determined.

We will keep you updated as soon as more information is revealed.