There have been rumours all week that Sting’s WWE deal has expired and as of right now the Wrestling Icon is not under contract with the company.

It was reported on Monday evening by Pro Wrestling Sheet’s Ryan Satin that Sting was no longer under contract with WWE. Although we will not see Sting on screen with company any time soon there is still a chance that a merchandise deal could be agreed in the future between the parties.

The speculation on Sting’s status began with the Major Wrestling Figure podcast reporting that the former WCW Champion had been pulled from a line of toys, with manufacturers Mattel releasing an official statement.

AEW speculation was then stoked as Cody tweeted the following in response:-

As one of Cody’s favourite wrestlers of all time it will be interesting in the lengths he will go to in order to get Sting to AEW.

There has been no in-ring action from Sting since the seemingly career ending injury, he sustained at Night of the Champions against Seth Rollins back in 2015. ‘The Icon’ has openly discussed his desire to compete again. The window for the possibility of this may be closing as he is now 61 years old and has not wrestled since his injury

Although its unlikely to see Sting in action on AEW it looks like we will see him make an appearance or two. The first in the upcoming Double or Nothing pay per view on May 23rd. 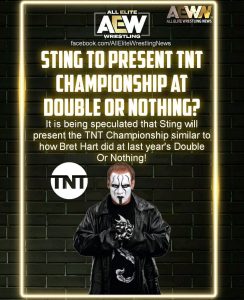 It is being speculated that sting will present the winner between Cody and Lance Archer in the Final of the TNT Championship. It is a rumour at the moment but with this week’s contract revelations it seems very likely.