WWE’s latest documentary based on The Undertaker’s ‘Last Ride’ has been a massive hit with fans. In the final episode of the WWE Network’s program, we seen an important statement that might have slipped under many fans’ radar. 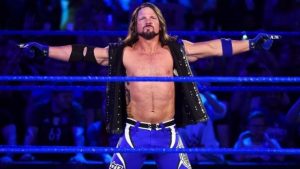 Within the documentary Steve Austin was talking about the respect he has for his former colleague ‘Taker when he suddenly declared that AJ Styles was the ‘Best wrestler to walk on two feet right now. Within the same episode the Phenomenal one received praise from Edge, Triple H, Michelle McCool and Undertaker himself

This goes against what WWE are saying right now, the company recon that Randy Orton is the ‘greatest Wrestler Ever’ but Stone Cold clearly thinks it is the new Intercontinental Champion

To hear compliments like this from wrestling legends must make AJ immensely proud of what he has done in the company. Fans were worried that Vince McMahon would not give Styles the push that he deserves, but after four years in WWE AJ is slowly becoming one of the legends that he admires.

Styles took to Twitter to speak about how privileged he feels about facing Undertaker in possibly his last ever match. Here is what he had to say about the Boneyard Match experience at WrestleMania:

Still floored by the experience and reaction to the #BoneyardMatch at #WrestleMania.
If it was the last time @undertaker laced up his boots, I’m honored it was against me. #TheLastRide https://t.co/qzofoKEn2Q

Austin did not however bring up the rumour that we will one day see him face Styles in the ring, to be honest he must be bored hearing the same rumour reignited every so often.