Lately within AEW The Dark Order have been attempting to recruit new stars to their faction. The most noteworthy of the new recruits have been Anna Jay and Colt Cabana. We have now heard that a key member of The Elite attempted to join the faction. 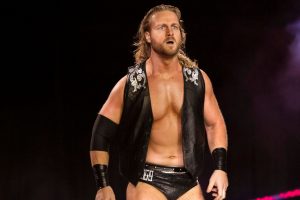 In the latest episode of Being the Elite, Hangman Page was discussing with Brodie Lee that he tried to join the group back in in December or January. The two AEW stars discussed that Page filled in the ‘application’ but never heard back from them. Brodie was very quick to say that it is not too late, but Page said that he was now in a better place.

As always Brodie was filled with rage and took his anger out on Alex Reynolds and john Silver. Page has the potential to be the biggest star to join the faction to date, but instead they lost the opportunity due to the fact that emails were not returned.

In the same episode of Being The Elite, we seen Silver and Reynolds trying to recruit Proud and Powerful and Orange Cassidy to The Dar Order. Unsurprisingly they did not have any success but it is clear that they are trying to grow their numbers.