Deciding who will be next WWE champion is usually the job of creative minds within the company and decisions finalised by Vince McMahon. However, it seems that one of the most popular wrestlers of all time has endorsed Dolph Ziggler ot be the next Champ.

WWE posted a picture on Instagram of Dolph Ziggler holding the WWE Championship with a caption reading ‘A glimpse into the future?’ Dwayne Johnson responded by saying “I’d co-sign this decision. Talented dude and always has a spark in his presentations”

A glimpse into the future? @heelziggler 🤔

Drew McIntyre, the current WWE Champion, did not appreciate The Rock’s comments. He responded with ‘It doesn’t matter what you think’ brave man using the most electrifying man in sports entertainments catchphrase. 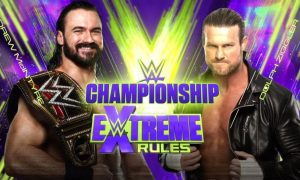 On Sundays Extreme Rules pay per view we will see Ziggler take on Mcintyre for his title. Ziggler has never been WWE Champion so he will be set on winning the title for the first time.

The Rock has not really had much interaction with Ziggler. He mentioned him once in a promo back in 2009 asking ‘Who in the blue hell is Dolph Ziggler?’ Clearly, he knows who he is now and feels he should be the next man to lift the coveted title.