Following a confrontation on this week’s episode of Raw a WWE Championship match has been set for Backlash pay per view on June 14th. 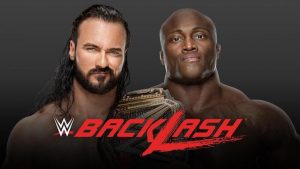 Bobby Lashley has officially been confirmed as the next challenger for the title who will also have MVP in his corner.

McIntyre defeated SmackDown’s Baron Corbin in a non-title match in the main event of last night’s Raw. Before the match up, Lashley and MVP came out to the stage and cut a promo where MVP said they have taken a personal interest in the match. Lashley said he was putting McIntyre on notice and coming after the WWE Championship.

After McIntyre won the main event he exchanged words with Lashley and MVP. He yelled that he and the fans have waited a long time for Lashley to step up and be the killer that he is. McIntyre said this is the version of Lashley he wants to fight. MVP held Lashley back and gestured that McIntyre’s time as WWE Champion is running out.

This is the @fightbobby EVERYONE has wanted to see for two years now. You’re a dangerous man, but leave your marital issues at the door because if we’re going to do this, I want the very best version of Lashley. I’ll be waiting. https://t.co/tsSDA4OYqP

The two have history when it comes to title matches. During their time in TNA, Lashley won the TNA World Heavyweight Championship from McIntyre back in 2016.