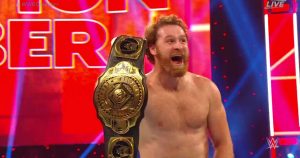 A noticeable absentee from the heel faction was that of Sami Zayn. The current Intercontinental Champion was not included anywhere throughout the episode.

The reason for that, according to Wrestling Observer Newsletter’s Dave Meltzer, is that he does not want to wrestle during the pandemic. It was previously reported that WWE have told staff this is perfectly fine to do during the global outbreak. Zayn recently missed a couple of episodes due to getting dental surgery. He has now fully recovered from that but feels he and his family would be safer staying away from live shows and the taping of episodes.

It is likely that we have only heard of a handful of the people who haven’t wanted to wrestle. The skeleton crew WWE sends to shows has included a lot of Performance Center and NXT stars as of late, which would appear to suggest that WWE has very few main roster wrestlers actually wanting to wrestle at this time.

You will have noticed that on the past few episodes of Raw and SmackDown, the same people have been used for multiple segments throughout the show. On this weeks episode of Monday night raw we seen Andrade and Apollo Crews face each other in a tag team match which lasted over 20 minutes Later on the episode they also had a singles match which was also over 20 minutes long. This suggests the promotion doesn’t have enough willing stars to fill out 3 hours on a Monday or 2 hours on a Friday.