Next week is set to be a very interesting week in WWE. The upcoming pay per view, Money in the Bank is shaping up to be an extremely unique and unpredictable event with both ladder matches taking part simultaneously. Starting in the WWE headquarters lobby and culminating in on top of the Tower.

It appears that we will not have to wait until the pay per view to be shocked and surprised. It has been reported by POST Wrestling that on Monday Night RAW this week we should expect to see AJ Styles making a return. The report also speculates that AJ will be involved in the Money in the Bank pay per view in some capacity. 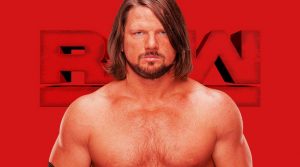 “AJ Styles is set to return on this Monday’s episode and is expected to be part of the Money in the Bank show that will stream on the WWE Network next weekend.”

A spot in the ladder match previously belonged to Apollo Crews, however, the former NXT star had to pull out due to injury. Therefore, this week’s Raw will feature a “Last Chance Gauntlet Match” to determine the final competitor in the Money In The Bank ladder match for the men.

With Styles reportedly set to be involved in the Money In The Bank pay-per-view, it seems quite likely that WWE is going to have him win the gauntlet match and be a surprise entrant into the ladder match that will be featured on the show.