As we reported earlier in the week, Sami Zayn has been stripped of the Intercontinental Title for not being able to compete due to the Coronavirus. WWE announced that they would support athletes who were worried during this outbreak and that all they had to do was speak to HR. Apparently that is not true as Zayn’s title is now up for grabs.

WWE has announced that in order to find a new Intercontinental Champion they are going to be holding a tournament. Tonight’s show featured the first two quarterfinal matches. 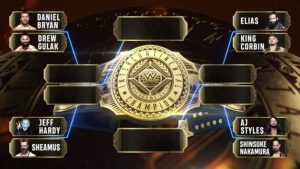 The first match featured Elias and Baron Corbin. This match has been seen so many times recently and like others this was far from a technical masterpiece, but it did go for several segments of the show.

Elias won with a roll-up. Elias will move on to the semi-finals.  Corbin gets to face the Raw champion on Monday. So, all hope is not lost for King Corbin.

The second match of the night was Daniel Bryan vs. Drew Gulak. The two men have formed an alliance over the last few months.

The match was easily the match of the night, but it did not match the intensity of their previous match-up

Daniel Bryan won with a heel hook. After the match, Bryan cut a promo about how he’s never had another shot at the IC title since he retired which was a bit unusual considering he faced Sami Zayn for the title at WrestleMania. Must have slipped his mind.

WWE Announced the other matches in the tournament set for next week would be: