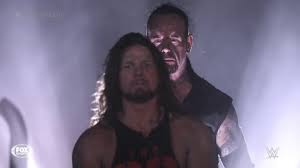 One of the surprise highlights of WrestleMania 36 turned out to be the cinematic Boneyard Match between The Undertaker and AJ Styles. During the build-up it seemed like the match was simply going to be another Buried Alive Match. But between the way it was shot and directed, farmhouse film set that was used, the involvement of Karl Anderson, Luke Gallows, lasers and explosions, the match took on a completely different feel from anything we had ever seen before from WWE.

Vince McMahon had the simplest outline for what the match would be, but had no other ideas. Triple H had to run with it essentially on his own.

Triple H revealed how the match came about in an interview with After The Bell,

“As we started coming down the pipe towards Mania, obviously Mania was taking place prior to WrestleMania [airing],” he explained. :So, at that point in time, a lot of things were taking place at the same time. So when we got done shooting NXT television, I then went to Vince and was like, ‘so I feel like if there’s something that I can take and run with it, that would probably be the most helpful because everybody’s going to be running in different directions. And what do you think needs the most for me to look at it?’ And he was like, ‘the Boneyard match’, and I was like, ‘OK, great. So what is the Boneyard Match?’ He’s like, ‘I don’t know, like a graveyard. It’s in a graveyard.’ I said, ‘OK.’ He was like, ‘they got this huge field and it turns into a graveyard in the middle of nowhere.’ I go, ‘so what do you want it to be’, and he’s like, ‘I don’t know just make it good.’ So I was like so you want me to take that? He was like, ‘yes, please.'”

He went on to explain that Michael Hayes didn’t like the farmhouse set they planned on using, and couldn’t get him more than one camera. Hunter decided to bring in NXT’s digital team, which included Jeremy Borash (who famously helped create Matt Hardy’s Hardy Compound matches in TNA and WWE). 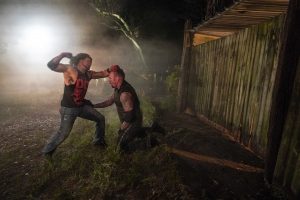 “I said, ‘Look we can shoot it with them, and we can do it cinematic style and I could bring a bunch of cameras and I can shoot all at once. I’ll shoot it like a film. I’ll shoot it in a different format. And you know, I believe we can create something special with this, and I don’t know I think most everybody else was against it,'” he explained. “Vince was like, ‘Well, I don’t see we have much choice. So that’s what we’re going to do’.”

Triple H said he was very proud with the end result, but didn’t agree with fans who thought this could be a regular occurrence for “The Deadman”

“I saw people after saying Taker could go forever and in this kind of format because like the physicality, there’s physicality,” he said. “Like dude, AJ was flying around on the dirt on the hard ground with rocks. They were beating the tar out of each other, and it was a long shoot. We got it done, and it turned over pretty good.” 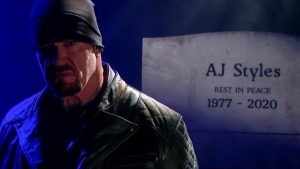 We absolutely loved the Boneyard Match and would love to see more of these Hollywood style matches in the future. After seeing Taker and Goldberg live a few years ago it is clear why these older legends may need a few takes before letting the fans see a final product.