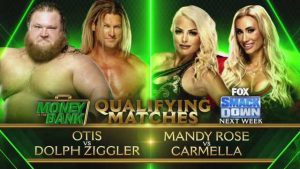 There were two more names added to the Money In The Bank Ladder matches last night on Smackdown.

In final women’s qualifier we seen Carmella face up against Mandy Rose for the last spot in the ladder match.

Both women showed off their athleticism before Deville was caught by a nasty kick to the face. As Rose seized control of the match. Sonya Deville arrived. She told the story of last year’s Money in the Bank match, when she handed over her spot in the match to Rose, then helped her and The Golden Goddess still managed to lose.

The Pride Fighter threatened to come to the ring for a fight but stopped just in time for Carmella to score the win over her distracted opponent.

After the match, Deville hit the ring and unloaded on Rose, Most likely setting up a singes match between the two at next week’s pay per view.

EXCLUSIVE: @CarmellaWWE plans to become Ms. #MITB again and prove once and for all that #MellaIsMoney! #SmackDown pic.twitter.com/rMNU0GlhtG

In Smackdown’s main event both Dolph Ziggler and Otis looked to add their names to the Men’s Money In the Bank ladder match.

Otis pummeled Ziggler in a one-sided match before connecting shoulder-first with the ring post. Ziggler capitalised and dominated for a while. Otis fought back, drove Ziggler into the corner and set up for the Caterpillar. Ziggler evaded it and tried for the Fameasser. Otis caught him but the heel wiggled free and delivered the Zig-Zag for a near-fall.

Ziggler set up for a superkick but Otis caught him and dropped him with a fallaway slam. The Caterpillar followed, successfully this time, for the win

WWE will reveal the final male participant this coming Monday in a gauntlet match.