When Tyson Fury battled Braun Strowman in Saudi Arabia last year, he showed a massive amount of promise, its actually surprising that he hasn’t made more appearances in WWE.

He has been trying to reintroduce himself to the company of late and has recently taken to Twitter to call out current WWE Champion Drew McIntyre. Today he took it one step further and call out the Scot in a conversation with BT Sport. 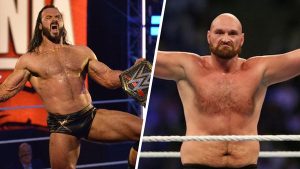 Here is what the Gypsy King said on air:

“I am a big fan [of Drew McIntyre], big, big fan. He’s absolutely in fantastic shape, real good looking fella. He may be able to teach me a few beauty tips and a few wrestling moves. But yeah, I did see him talk about a big British fight.

“Sure, if WWE comes to the United Kingdom and they want a massive pay-per-view event, then look no further than the Gypsy King vs. Drew McIntyre for the WWE belt [Championship].”

Nothing concrete has been set between the two athletes however that has not stopped them calling each other out on social media and in various interviews.

Fury has now challenged WWE to allow him to headline along the current WWE champion in an all British headline match in a UK pay per view.

Tyson Fury thinks it would be a massive pay-per-view event. It would probably draw a massive crowd and a pretty good buy-rate However we are not sure if Triple H would agree. He has recently claimed that a pay per view in the UK would alienate the American audience due to the time difference. This could be costly for the company and therefore would not be something WWE would be looking into at present.