The Undertaker says that the aftermath of the Montreal Screwjob was what led up to him truly becoming WWE’s leader of the locker room.

Most wrestling fans know the incident in which Bret Hart was double crossed by Vince McMahon on the eve of his departure to WCW. For those who do not know, here is in the incident in its simplest form. 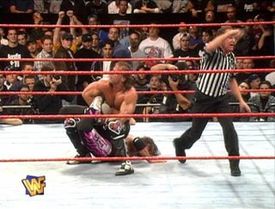 At Survivor Series 1997 Bret Hart defended his WWF Championship against Shawn Michaels. Michaels put Hart in a Sharpshooter, Hart’s finishing move, and then WWF Referee Earl Hebner called for the bell under Vince McMahon’s order even though Hart had not submitted (or tapped-out). As a result, Michaels became the WWF Champion.

The Undertaker, Mark Calaway, has a relationship with all three men involved, Bret Hart, Shawn Michaels and Vince McMahon. In the aftermath of all the chaos that went down on November 7th, 1997, Undertaker played a massive role in keeping all the upset WWE Superstars at bay while those who were involved sorted out their business.

Undertaker recently spoke to ESPN where he spoke about how he wasn’t sure if he would even return to work the next night after seeing the betrayal. He continues to say that if he were in the ring with Bret Hart then the situation could have been avoided completely.

“That’s kind of the point, I think, where the whole locker room leader really started to come about. The boys knew how upset I was that one of us got screwed over. But then the office kind of could see the point of, ‘okay. He’s trying to do what’s best for business,’ and it always was that way for me. It was like, you know, I’ll defend you if you need to be defended, but it’s all about business at the end of the day. That’s where I fell in that, you know, I was one of the rare people that kind of fell into that groove where I was trusted, you know. Yes, I was one of the boys, but I was trusted by the office, just like I was sitting in on their meetings.”

Bret Hart has always said that he would have dropped the title to another opponent so maybe if Taker was in the ring that night it would not have had to be so deceitful. Undertaker Later fought Micheals in a casket match which led to a four-year back injury for HBK.

Check out Undertakers ESPN interview below: