Diamond Dallas Page made it known earlier this week that AEW star QT Marshall had tested positive for COVID-19 after not being present at shows for a few weeks. 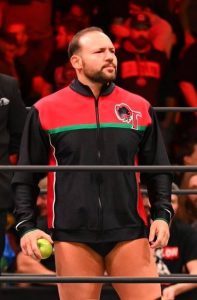 On Wrestling Observer Radio Dave Meltzer said that Marshall was feeling better and getting over the worst of the symptoms. Marshall did feel better after a second test however it still came back positive, he is now waiting on results for a third test to come back later this week.

It should be mentioned that Marshall’s wife also tested positive for Coronavirus. It is being reported that there have been days where the virus was getting the better of both Marshall and his wife, but the worst seems to be behind them and they are both on the mend.

The last time we seen QT Marshall was a while ago, the last recording he was present at was at the beginning of June where he teamed up with Dustin Rhodes in an unsuccessful challenge against Kenny Omega and Adam Page for the AEW Tag Team Championship.

We hope he makes a full recovery soon and gets back to action.