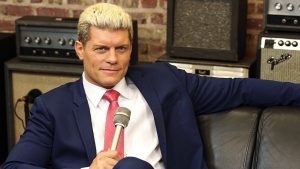 Bleacher Report had the opportunity this week to ask fan questions to Cody Rhodes-AEW Executive Vice President. They were able to ask about one of the hottest topics from AEW fans on social media. That topic was none other than the idea of an AEW video game.

Based on Rhodes honest answer we are afraid to report wit will not be anytime soon.

In order to make sure the game is the best it can be, fans need to be patient so that the company can deliver an amazing game.

“I’ll give the honest update: the AEW video game will be something all fans know about as we begin the process and as we move forward. If we were to make a very good game, which is our intention, it’s going to take time. Game development is arduous, it’s a very creative space, and we want to do it right. We will keep people updated, it won’t come as a surprise, we want them to take the journey with us. Be extra patient so we can deliver.”

From what Rhodes says, it sounds like the plan to take their time on it and keep us as updated as the possibly can on the development.

Fans will totally understand the time that AEW want to take over this, as Rhodes says game development is arduous and rushing it is where mistakes happen.

We recently reported that WWE would not be creating a new game this year due to the backlash they got for rushing putting the game out when it was not ready AEW understandably do not want to fall into that trap.