Despite having only been in NXT for a few months, Austin Theory was given a brief run on the main roster earlier this year. His debut for the main roster was rather unexpected considering he hadn’t been involved in any of the big NXT storylines. Theory made his first main roster appearance at WrestleMania teaming up with Zelina Vega’s faction. He moved to another faction soon after to join Murphy as one of Seth Rollins apostles as part of his Monday Night Messiah program. 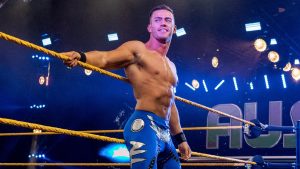 We have not seen Theory on television for s few months now. It has been reported many times that Theory had been suspended but there has been no official statement from WWE. Dave Meltzer of Wrestling Observer Radio has provided more information on his absence, reporting that Theory has been off television due to allegations made against him in relation to the #SpeakingOut movement.

Here is what he had to say courtesy of Wrestling News:

“There’s an allegation against him and then he disappeared. It’s not an injury or anything like that. Is that why? [WWE] may go and say he had a car accident. I think that Seth Rollins said that – he used some term like ‘personal reason’ and he’ll be back so I presume that it’s a Patrick Clark [Velveteen Dream] type of story.”

Here is the quote from Seth Rollins where he says that Theory has not been seen on screen due to personal reasons:

“He had some personal issues that came up so he took some time off to sort through them for the past month or two. It’s hard right now but we hope everything’s good for him so we hope to have him back sooner than later.”

As part of the #SpeakingOut movement on social media, WWE fans, as young as thirteen accused Austin Theory of sending inappropriate messages and pictures.