We previously reported that the All Elite Wrestling Champion Jon Moxley tested negative for COVID-19. His wife Renee Young did test positive. Moxley is reported as not feeling sick but felt that there could be good chance, he is infected and is yet to test positive. Young initially tested negative when first tested by WWE but later tested positive after feeling some symptoms.

The couple have said that they are still living in the same house but living in separate parts of the home. 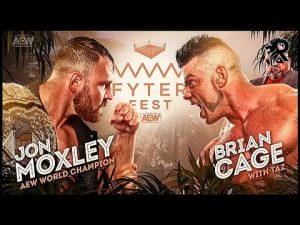 AEW Fyter Fest is coming up over the next few weeks. Moxley is set to defend his title against Brian Cage in the second episode of the Fest which is due to air on July 8th but is being recorded July 2nd.

We previously reported that AEW’s doctor informed Moxley to start isolating himself due to his wife’s condition. If Moxley does not show symptoms or test positive for the virus he has been told he can continue with performing in his match on July 2nd

It is indented that Moxley takes multiple tests for the virus this week. If He does test positive at any point between now and next week then the plans to face Cage for the title will have to be rescheduled.