Back in October of last year Xavier Woods suffered an ankle injury during a live show. We have not seen him in action since then, but we now have a bit more information as to when we may see him wrestle. 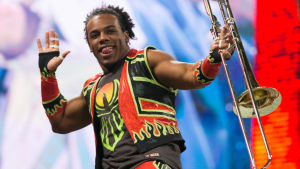 Woods appeared on this week’s episode of WWE’s The Bump where he was asked or an update. Here is what he had to say:

“I, unfortunately, don’t have an update on when I’m gonna be back in-ring action but I am feeling pretty good. I’m moving around, I’m doing calf raises and whatnot. Things are coming along, I can’t let the goose out of the back yet, you know. I don’t know if that’s a saying but it is now. Like I said, I’m feeling pretty good.”

The New Day member joked that although he has been sitting at home recovering during this time, he has managed to win the SmackDown Tag Team Championship on two separate occasions. Facing oppositions without Woods, Kofi Kingston and Big E have won the titles back in November and again in April.

Woods has suffered a serious injury to his Achilles which usually takes a longer rehabilitation time compared to other common injuries. It is most likely that we will see Xavier support his team alongside Francesca ii. His in ring comeback may be a bit longer.