There were several WWE stars who were absent from the latest set of episode recordings due to varying COVID-19 reasons. Dave Meltzer of Wrestling Observer Radio gave us some backstage news on his latest episode.

This week’s SmackDown was recorded and aired on the same day, around half of it was centred around the undertaker including a full replay of the Bone Yard Match against AJ Styles at WrestleMania. Styles and Daniel Bryan were among those who were not present at the taping.

It was said that Styles and Bryan were not at the tapings because they were part of an in-ring interview with Renee Young and in close proximity to her before she tested positive for Coronavirus. 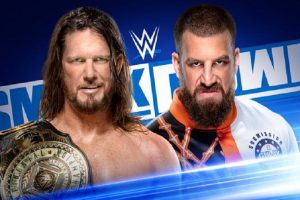 AJ Styles was scheduled to take on Drew Gulak to defend his Intercontinental Championship on Friday nights Smackdown. The match had to be cancelled due to Styles absence and Gulak commentated on 205 Live instead.

Two more names that were missing from the recordings were Shorty G and Mojo Rawley. Both were also in close proximity to an interviewer who tested positive for Coronavirus, Kayla Braxton. The match up between the two was produced by Jamie Noble who also has tested positive for the virus.

Other names who were missing from the recording but have yet to be confirmed with an explanation were Otis, Tucker, Sheamus, Sonya Deville and Mandy Rose