Last week, accusations of sharing inappropriate images with a minor were made against NXT star Velveteen Dream.

He has been trending since a screenshot was leaked that depicts him sending sexually graphics images to a minor.

There was initial speculation that the shared image was likely the result of someone hacking Dream’s Instagram account, and this is what Dream himself claimed in a statement shortly afterwards.

Be assured I did not communicate inappropriately with anyone. A private photo of mine was shared without my consent or knowledge and I am working with a third party to look into this matter.

Many wondered whether the accusation would affect Dream’s push, or whether WWE would go as far as releasing him given the serious nature of the accusation.

Wrestling Observer Radio brought up this topic, and it appears that for the time being at least, that WWE isn’t planning on taking any action, as Dream is still being pushed hard as the number one contender to Adam Cole’s NXT Championship.

“Velveteen Dream is clearly there for whatever it’s worth. I mean it’s, you know he wasn’t on the show tonight, but he’s supposed to wrestle Adam Cole and that was pushed pretty hard.”

Cole is set to defend his title against Velveteen Dream next Wednesday on NXT. This match was originally set to take place at TakeOver: Tampa on April 4 before that was cancelled due to the Coronavirus outbreak. 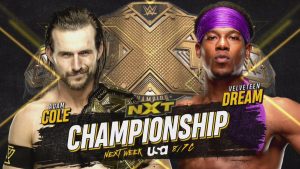 As such, the rivalry has been going on for a number of weeks now, with the latest development being last week when Velveteen Dream pinned Cole in a tag team match.

Since Dream made his initial statement, there has been next to no updates regarding the situation, but it is no doubt being investigated to find out what actually happened.