WWE’s BackLash pay-per-view had a stacked card with matches including the ‘Greatest Wrestling Match Ever’ in which we seen Randy Orton defeat Edge. However, it seems that was not the match that caught the attention of Vince McMahon.

A new ‘Chronicle’ documentary has been released on the WWE Network which covers Jeff Hardy. Hardy has recently been in a massive back and forth feud with Sheamus in recent weeks.

The documentary has reportedly made a lot of viewers feel uneasy due to the fact it is heavily focussed on Hardy’s fights with alcoholism and addiction. 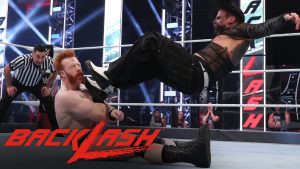 Within the program footage was shown of Hardy backstage after his match with Sheamus at BackLash. The first thing Vince McMahon said to Jeff when he went backstage was:

The match went down well with fans as well as WWE management. It was an entertaining battle between the two, however the main criticism was that Hardy came out with the loss.

That has allowed the due to continue their feud into Extreme Rules Horror Show where it looks like WWE are trying to set up a ‘bar fight’ between Hardy and the Irishman. The company is reportedly waiting to confirm Sheamus is able to perform before making the match official.