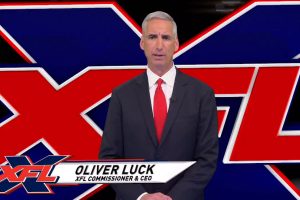 TMZ reported today that Luck discussed that the claims against him, which are being used as the reason he is was terminated are fabricated. The specific details of the lawsuit have been redacted.

We can assume that the reason the details are redacted is due to the fact he probably signed a Non-Disclosure Agreement when he was brought into the XFL.

The Xfl was forced to shut its doors due to the coronavirus pandemic. Up until that point Oliver Luck ran the league since it was resurrected again in 2018.

Luck ran the league since its resurrection in 2018 until the coronavirus pandemic ultimately led to its demise and it was forced to shut its doors.

It was rumoured that McMahon filed for bankruptcy to make sure that his other investments would not lose money during the global financial struggles.

It is unknown exactly how much money Luck is looking for, but he wants a guaranteed portion of his contract to be paid off.