It was reported that Vince McMahon made several changes to last night’s BackLash pay per view following the removal of Paul Heyman as executive producer of Monday Night Raw. 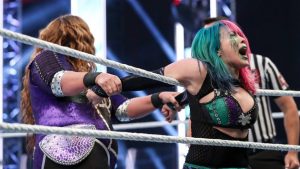 On Wrestling Observer Radio, Dave Meltzer reports one of the changes was in the match between Asuka and Nia Jax for the Raw Women’s Championship. The title match ended in a no contest after both athletes were counted out. It would be interesting to know what Paul Heyman had planned for the bout before Vince interfered.

Meltzer goes on to state that McMahon would now be making changes to tonight’s Monday night Raw now that Paul Heyman has no input into the show. This week’s Raw and Smackdown are due to be taped early today and tomorrow will see the recording of next week’s shows.

It will be interesting to see how tonight’s episode of Raw will turn out. Vince McMahon and Paul Heyman have been noted to have a different approach to how they want story-lines and feuds to progress. Heyman likes to give new stars a push to see their potential whereas Vince prefers to use athletes who are already stars.