With the WWE 2K21 game having been cancelled and the AEW game postponed we will be getting a new form of game this year in WWE Battlegrounds. This made us think back on great games of the past. Here we take a look at what makes these games worth buying each and every year. Here are 10 awesome things about Wrestling Video Games that we hope the new games will either maintain, implement or overhaul. 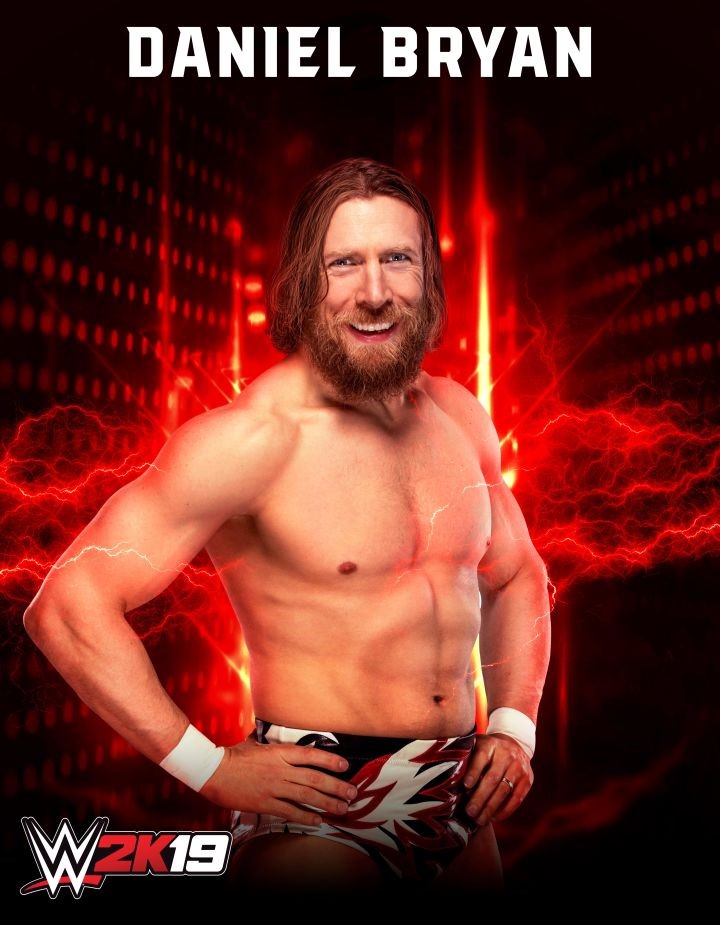 Whether it’s been Season Mode, Road to Wrestlemania, MyCareer mode or the 2K Showcase mode most WWE games have had some form of Story driven mode behind them. The reason we love these modes vary from mode to mode. 2K Showcase mode has given us a chance to relive some epic moments from WWE past including the highlights of Daniel Bryans Career up to his return to the ring in 2018, The rivalry between the likes of John Cena vs CM Punk in 2011 and Triple H vs Shawn Michaels from 2002-2004 and the career of the Texas Rattlesnake Stone Cold Steve Austin. The 2K Showcase has been fan service but it much like the Attitude Era Mode found in WWE 13 it hasn’t given us anything we haven’t seen before. This is why we love Road to Wrestlemania modes, they have done stories which couldn’t be done on TV such as the time Candice Michelle turned HHH into a woman or the United Kingdom Faction resulting in Sheamus winning every single title at once. They have even done stories that would later appear on WWE television such as the Legacy Triple Threat at Wrestlemania (Granted with no Dusty Rhodes, Million Dollar Man or Undertaker at ringside). MyCareer mode has been the latest story mode and has shown promise but the story comes to a halt as soon as you win the title. Still the fact there are swerves and unique settings is a step in the right direction. If we get a Road to Wrestlemania mode and a 2K Showcase mode then it would probably be a top seller. 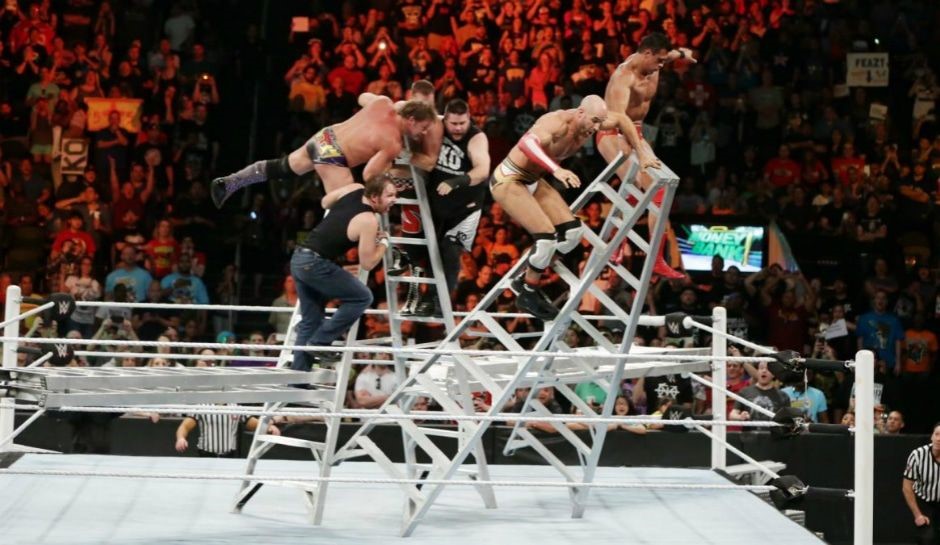 While the latest WWE game may seem to have the greatest deal of match types available with its ability to create specific rules and win conditions it still lacks some previously featured match types. Great Matches like SlobberKnocker Matches, Casket Matches, Buried Alive Matches, Bra and Panties Matches, maybe not that last one. WWE Games have a history of great match types they could bring back into the fold. It’s been nearly two years since I’ve been able to dive off a helicopter in times square or chokeslam someone off the Smackdown Fist. Everyone felt like Shane McMahon or Jeff Hardy when jumping off those with the added bonus of being able to get up and continue afterwards. While you can jump of the stage and trucks in the car park it’s not quite the same is it? The most you can maybe do in a normal match is put a ladder in one of 8 places and only if your character has the right ability jump off onto a table if the opponent hasn’t already moved. I want to do a 630 off stacked ladders as the Big Show onto Daniel Bryan who’s on a table. Is that too much to ask?

One of the main reasons to put out a game every year is to update WWE’s ever expanding roster. Every year we see new additions to the roster from brand new wrestlers to returning legends to the series giving us a chance to play dream matches that were never possible. We are unlikely to get Shawn Michaels vs Johnny Gargano but through the magic of video games we are able to take HBK at his prime vs Johnny Wrestling today. The roster has grown year on year and we can expect even more to appear through NXT UK and 205 Lives rosters growing day by day. Whatever your dream match, a well stacked roster will make endless match combinations for you to play through. 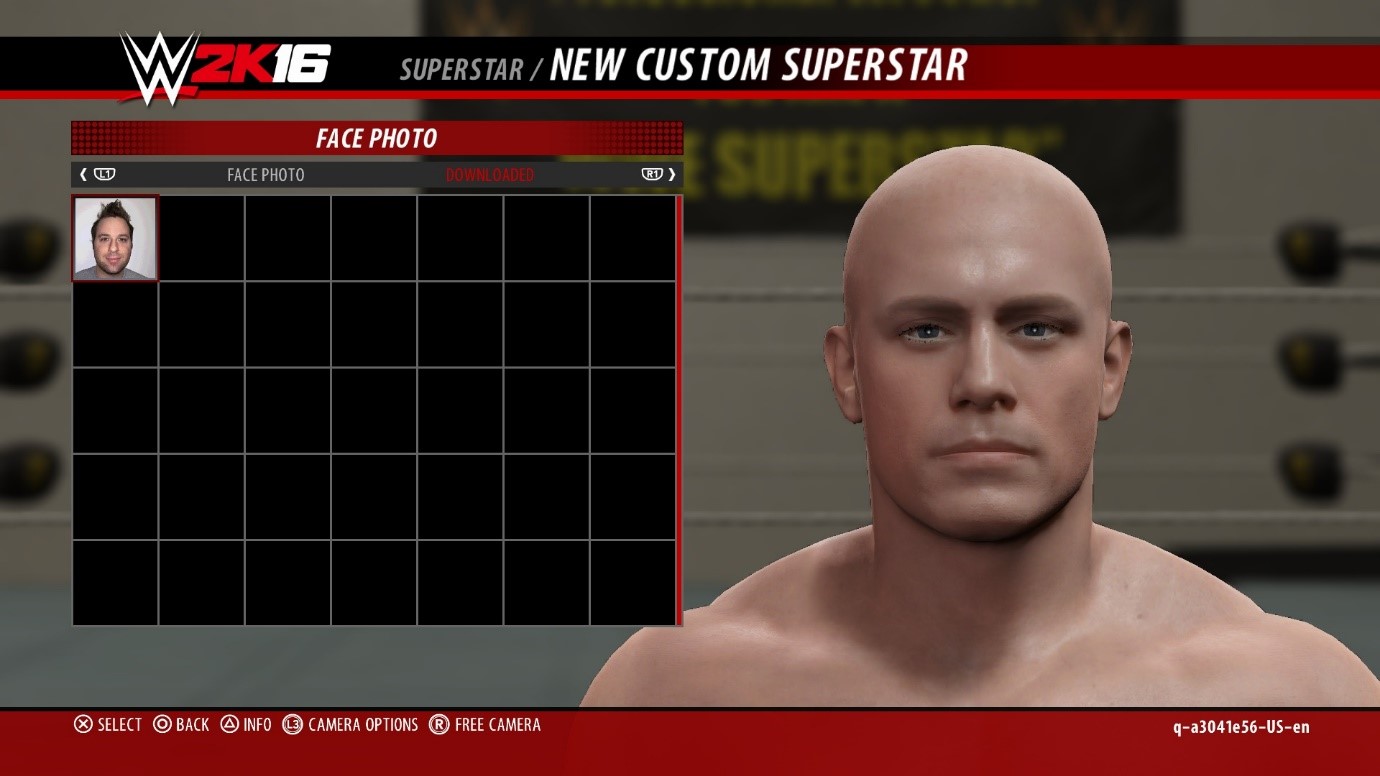 What’s better than playing as your favourite wrestler? Playing as yourself. You know you aren’t as strong or durable as wrestlers but why not live out the fantasy of beating Roman Reigns for the title or beating The Undertaker at Wrestlemania as you! The Creation Suite is one of the modes that gets better and better with every year. You can now scan your own face to put over the model giving as close to an official render of yourself as possible. You can choose what colour and material of clothes you wear and give yourself an entrance attire. You can create your own entrance borrowing from current of past superstars and set your own lighting and pyro to create a unique entrance (or just take Goldbergs like I do). You can pick and choose whatever moves you like making your finish as devasting as a Tombstone Piledriver or as humiliating as a Small Package (Imagine your finisher was a Small Package). You can even create your own title and arena now. With all these options you could have a match between Triple H and Cody Rhodes for the AEW World Title in the Impact Zone. Anything could happen! Well, Almost anything. Unfortunately the Create-a-Finish Mode has been removed for a number of years which really should be rectified. How else am I supposed to pull off my wrestlers ultimate manoeuvre the 9 amigos followed by a low blow? And please, if nothing else, bring back the create a story mode so that if the story mode we are given is terrible we can create our own to play through. 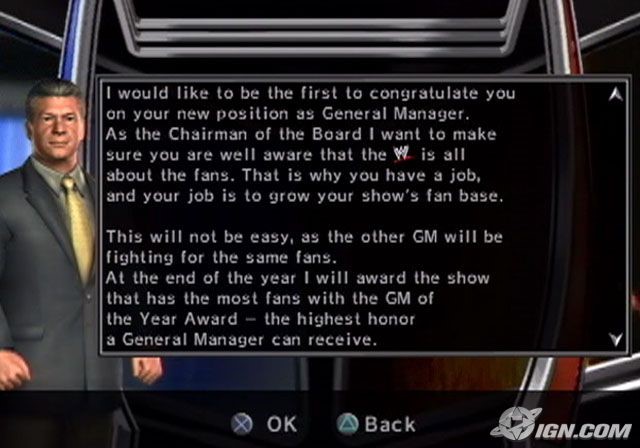 Why is this not a thing anymore? With the brand split in full effect (if you ignore the brand split like WWE has been doing since Wrestlemania) now is the perfect time for this mode to return. At the moment there are 5 brands in WWE that could be used for this mode as well as potentially creating your own. And imagine how good this mode could be online? While this isn’t everyones favourite mode it still has the ability to be an awesome side mode for you to spend time on. It’s really a shame this mode has only been featured in around 3 games. THQ or 2K, one of you bring it back and I’ll definitely buy that game. 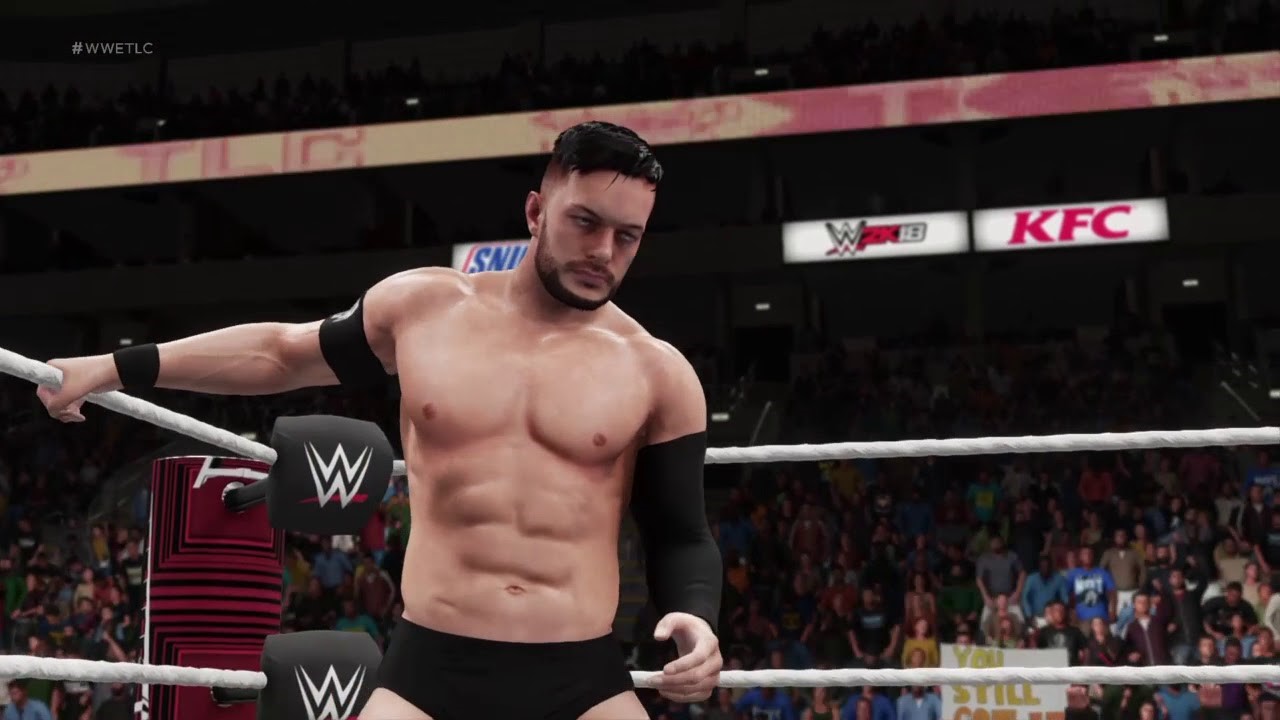 Are you beating ever wrestler far too easily? Is your fan created CM Punk not up to scratch? Then Online mode can solve your problems. Gone are the days of couch co-op, now you and your friends can play online against each other or by teaming up to face other players. Got a Wrestler you want to play as who’s in another company? Chances are there’ll be a fantastic creation someone has shared for you to download. As long as the servers are well maintained an online mode can create countless hours of fun.
7. Voice Acting 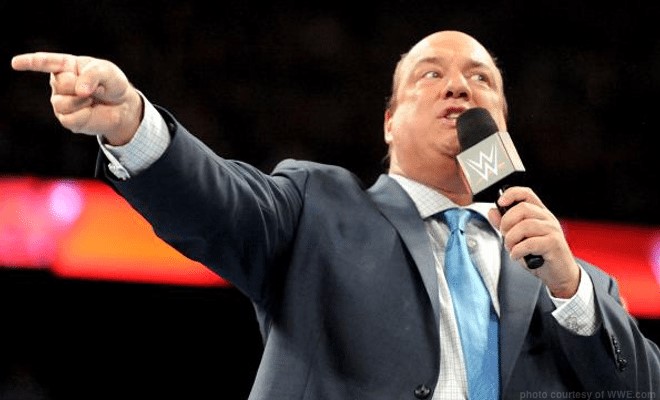 In a lot of modes we’ve had voice acting but unfortunately some modes just have text boxes. WWE has most of the talent available to record for the games but for the most part in recent years have chose not to. There was voice acting in 2k19s MyCareer mode but something that took you out the moment was John Cenas voice actor. Why couldn’t you get Cena to voice himself like everyone else? If you don’t have access the wrestler then don’t have them appear in the story mode. Commentary has been on the rise in recent years with less repetitive lines in each match although they should try to make more lines for created wrestlers as every time I hit a spear for some reason Michael Cole seems to think Batista is responsible. In recent years we have seen wrestlers taunts incorporate voice acting giving them a more lifelike feel. The New Day and Daniel Bryan come to mind with their “New Day Rocks” and “Yes/No” chants. Even add in more crowd chanting to make the match feel as alive as possible. 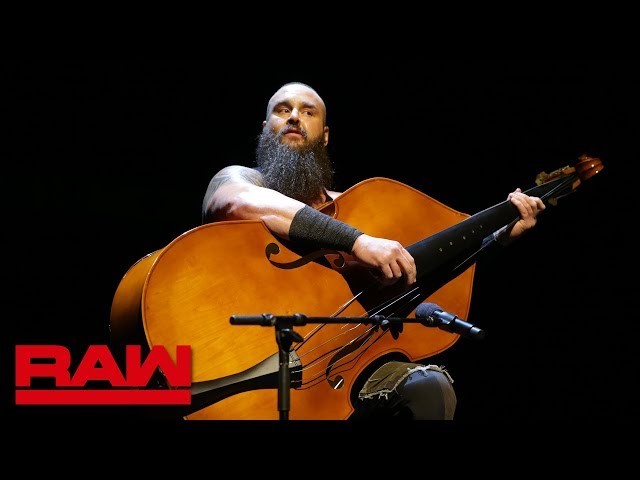 Music is something we all enjoy and every game has had its own background music. If done right navigating the menus can be enjoyable. You can turn off any music you don’t like so it won’t play while in the menu but I don’t understand why they can’t allow wrestlers theme music to be played in the menus as this used to be the case. Likewise in recent years you can’t use tracks provided by musicians as your entrance music. Add this feature in to make as many choices available as possible. Or even add in the ability to play a song from your console as your entrance music so your options would be truly limitless. 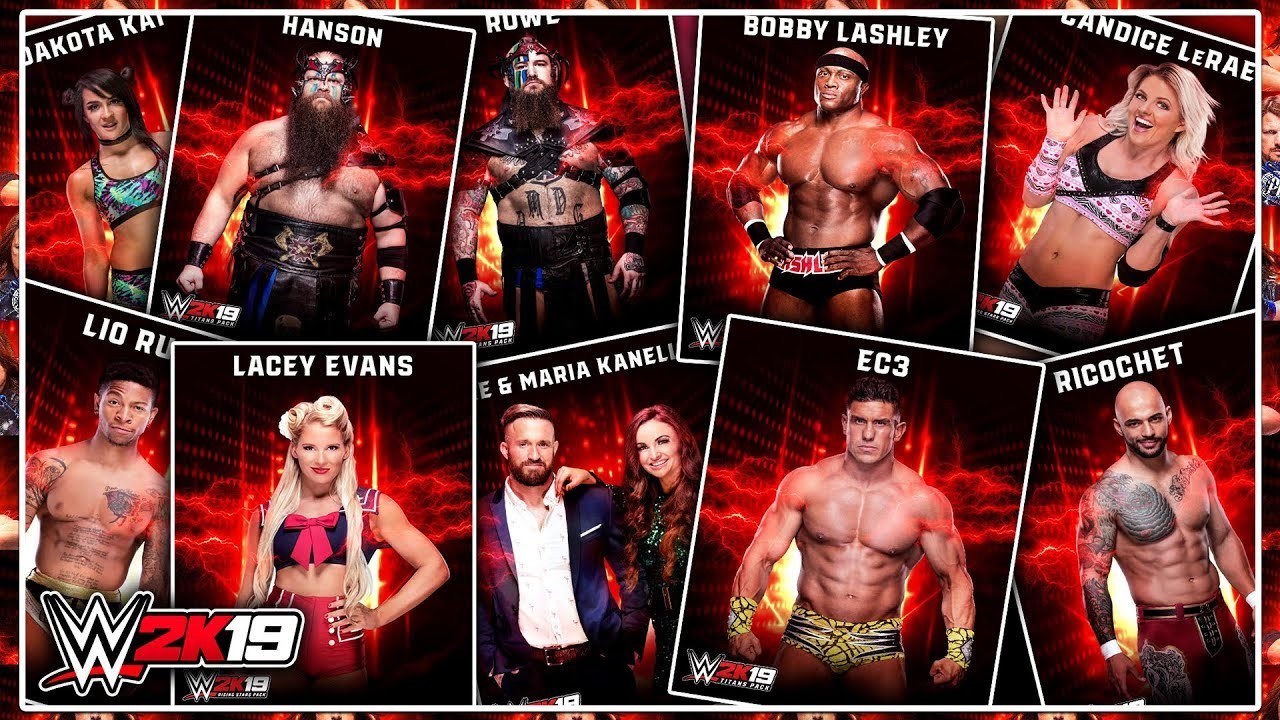 I remember a time where if your favourite wrestler missed the cut-off date to be added into the game you would have to wait a full year for their chance again. Does anyone remember who the first DLC wrestlers were in WWE games excluding preorder bonuses? I’ll give you a hint, it was in WWE Smackdown Vs Raw 2009. Still don’t have it? It was Evan Bourne, Charlie Haas, Ted Dibiase and Super Crazy. Quite the mixed bag THQ had provided but it was a sign of better things to come. At that point Evan Bourne was one of my favourite wrestlers as he pulled off manoeuvres in ways I had never seen before and Charlie Haas had been one of the wrestlers I’d watched growing up (at that point he was in his gimmick stealing phase). The following year we got members of the Nexus at the peak of their popularity showing that DLC was worth paying for. Fast forward to the DLC for 2k19 and we have the likes of Ricochet, Lacey Evans, War Mach…. War Raide…… Viking Experi….. their name will probably change another 3 times before this article is finished but in the game they are known as Hanson and Rowe. Top Stars of Raw then (at least they should have been) that we didn’t have to wait to play as til November of this year. Just another reason that good DLC can make a great game. Even the 2K Originals DLC in 2K20 had promise but it seemed to have lost its way as it went on with some questionable packs. 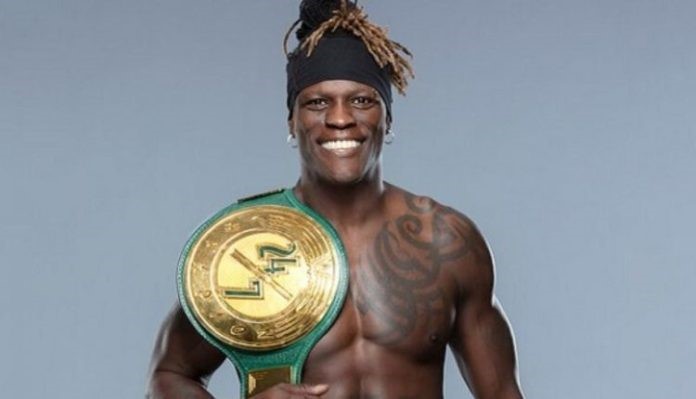 The 24/7 title is undeniably the most fin part of WWE programming at the minute and gameplay should be just as fun. The recent additions of block mode and big head mode are just bandages on 2Ks slower gameplay compared to the likes of THQ’s games. I could barely play WWE 2K15 because of how slow every move was and how long it took to get back up after taking a hit. Yes the graphics took a noticeable improvement with the switch to 2K and the current gen consoles but the games became less fun to play. We are on our way back to how fun it used to be but give us a bit of silliness. We would spend hours running about backstage on the American Badass’ motorbike throwing John Cena into the electric box or doing a Swanton Bomb off the top of the Smackdown fist. If we wanted to just experience a wrestling match that we could watch on TV then we’d just watch TV. There’s nothing wrong with a bit of chaos. That’s why you have the likes of Bray Wyatt’s new gimmick being so popular, give us that kind of unpredictable fun in our games too.

And those are our 10 top things we feel make wrestling games awesome. Do you agree? What do you think makes a wrestling game a great game? Let us know