At last night’s BackLash pay per view we seen the Street Profits take on Viking Raiders in a weird cinematic match. During the segment we seen Akira Tozawa interrupt the brawl alongside his ninja biker gang.

The tag teams had to band together and form the ‘Viking Profits’ in order to fend off the ninjas. One question that has been asked by fans is about the identity of the giant ninja who assisted Tozawa. 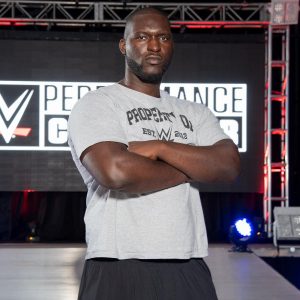 Omogbehin signed for WWE back in 2018 alongside the likes of Damien Priest and Matt Riddle. Last night at BackLash was his TV debut but does this mean we will see more of the giant on our screens?

Omogbehin, unsurprisingly came from a basketball backgrounf where he has played for several college teams. Hopefully, last night’s appearance was not just a cameo appearance, it would be good to see the giant introduced to the main roster as a permanent duo alongside Tozawa.