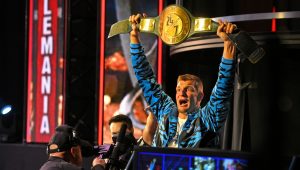 The 24/7 Champion Rob Gronkowski has Signed with NFL team.

The News broke on ESPN Yesterday when Adam Schefter confirmed that Rob Gronkowski was coming out of his football retirement to join the Tampa Bay Buccaneers. Playing for Tampa he will re-join his former teammate Tom Brady from the New England Patriots. Now that he has signed with the Buccaneers, it raised a few questions on Gronks future with the WWE.

Gronkowski signed with WWE a little over a month ago and it was suggested he would have a few matches culminating in a match at SummerSlam. The NFL tight end has made a few appearances on WWE since signing, most notably at this year’s WrestleMania. Gonkowski along with his friend Mojo Rawley hosted the big pay per view event. Within the Event Gronk became the new 24/7 champion when he pinned Rawley to take the title.

Regarding this current situation WWE Tweeted:

Congratulations to @RobGronkowski, the current WWE 24/7 Champion, on his return to football.

Per the rules of the 24/7 Title, Gronk must defend his championship at all times in any location. He could be celebrating a touchdown pass from @TomBrady… anytime, anywhere.

But remember when I was at my work and you cheap shotted me and stole my 24/7 title at Mania?

I can’t wait to spear you in the middle of training camp and win my title back. Or during a @Buccaneers game. 🤔#ReceiptComing!!!!

The details of Gronkowski’s contract are still unknown. The fact that he signed with NFL team Buccaneers came by surprise this Tuesday as it was expected Gronk would work two or three actual WWE matches (Not just 24/7 shenanigans). His Pro wrestling career will have to go on hold for a while as preparations for NFL seasons come soon.

Will we see Mojo Rawley winning the title from the training field this week? Or will we see Tom brady hold the belt up high as WWE 24/7 Champion?