In a recent interview with Daily DDT, WWE Legend Vickie Guerrero has revealed that she signed a full-time contract with AEW. 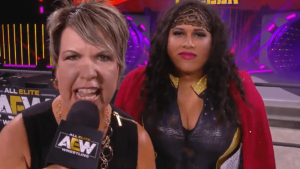 The former General Manager of WWE has recently been working as the manager of Nyla Rose. This was assumed to be short term but according to Guerrero she wants to make a big contribution to the promotion and sees herself being there for a long time.

Here is what she had to say:

“I retired from WWE in 2014. My focus was not to return to them. We just had a lot of just differences of opinions and things going on. If it wasn’t going to be for AEW, I don’t think I would be anywhere else, but when AEW presented that there was some opportunity, I gave 100%, just my whole being. I said, ‘I’m here for you and I can’t wait to be a team player with the company.’”

Guerrero explained that she was convinced to join the up and coming promotion because she has a lot of acquaintances there including Dean Malenko and Cody Rhodes.

She also mentioned that she has “fell in love” with her new employer after such a short time collaborating with performers, officials and backroom staff. She also emphasised how the promotion respect each and every employee which was a big part in her decision to sign with the company full time after being away for so long.

Guerrero also revealed that she and Nyla Rose have created such a great relationship behind the scenes. She is currently trying to help Rose within the Women’s division and their chemistry on screen is not acting, they truly get on with each other that well in real life.