It was announced by AEW last night that at this week’s All Out event, we will see Matt Hardy take on Sammy Guevara compete in the first ever ‘Daily’s Place Deletion match’ 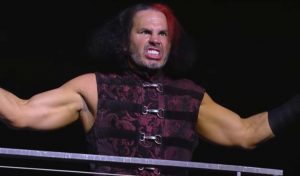 The tag team specialist and pro wrestling superstar recently sat down with Chris Van Vliet. Within the interview Matt Hardy opened up about how Vince McMahon and WWE management wanted him to transfer into a producer role within the company while working there.

“Vince and WWE, they already had it in their mind. In Vince’s mind, he was ready to move me on from being a talent into working backstage. Being a producer, helping give back and teach other guys behind the scenes. And I’m very happy to do that but a little later on. These last few years that I have to do this physically, I want to do it to the highest level that I can.”

Although Hardy is getting on in age and isn’t able to move as quickly as he could 20 years ago, he still has lots to offer within the ring and on the mic for promos. Its great to see that he didn’t take a back seat to focus on producing.

Matt has been in a feud with Guevara over the past few weeks which will be concluding this week at All Out. As mentioned, one of the rules for the match is if Matt was to lose the match, he must leave AEW. Some of the other rules include that the winner will be the last man standing which will be determined when one of them can’t answer the referee’s ten count. The finish can take place anywhere and there must be a winner on the night.