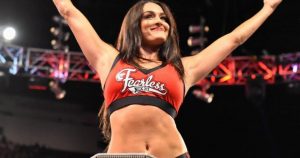 Former champion Nikki Bella has dropped some big claims in her recently released memoir called ‘Incomparible’ that she wrote alongside her sister Brie.

The superstar has been extremely honest in her shocking revelations including being raped twice as a teenager and  how the incidents affected her mentally including losing her self-confidence and allowing people to disrespect her.

In the book Nikki also explained how the WWE mishandled her neck injury which eventually led to her retirement. Nikki mentioned to management within the company that she was experiencing numbness in her limbs and her legs would completely buckle from underneath her during matches.

Despite explaining these symptoms, the female star says she was shot down when she asked WWE for an MRI. She detailed that the doctors told her that they would not be able to find anything in an MRI.

In hindsight, her neck issues were extremely severe and definitely real. The issues with her vertebrae, along with the cysts discovered on her brain, contributed to her eventual retirement from in ring action.

Now, Bella seems to be at least safe and enjoying her retirement. She along with her sister Brie are expecting a baby.

On top of that, whenever things get back to normal after the global health issues, Nikki will be inducted into the WWE Hall of Fame as part of their 2020 Class.