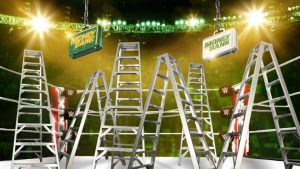 WWE’s upcoming pay per view Money in the Bank is taking place this Sunday My 10th and is available to stream from the WWE Network. We have previously reported that both the Men’s and Women’s ladder matches have been pre recorded and will take place in WWE headquarters. Both matches are set to be shown simultaneously and will start with the competitors in the Lobby of Titan Tower and culminating on the roof of the Headquarters.

According to PWInsider the rest of the matches will be shown live as it happens on the evening.

Although the cinematic matches during Wrestlemania were a success, live wrestling is always better than recorded, at least when it happens in the ring, it is hard to really notice the difference when there are no fans in attendance. Live matches always provide that atmosphere that allow you to always expect the unexpected.

Live broadcasts also typically prevent you from having spoilers leak out early.  Due to a WWE tweet We may already know which show will be claiming the women’s briefcase.

Here is the rest of the lineup for this Sunday’s show:

Fatal 4 Way for the SmackDown Tag Team Titles
The Forgotten Sons vs. John Morrison and The Miz vs. Lucha House Party vs. The New Day (c)

Men’s Money In the Bank Ladder Match
Aleister Black vs. Rey Mysterio vs. Daniel Bryan vs. King Corbin vs. Otis vs. AJ Styles

Women’s Money In the Bank Ladder Match
Nia Jax vs. Asuka vs. Shayna Baszler vs. Dana Brooke vs. Lacey Evans vs. Carmella