We have yet another update on status of WWE and Kairi Sane. For a while now we have been reporting that she is on her way out of the company. It is being reported today that July 20th is officially the last day of her WWE contract. 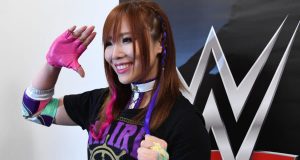 It was reported earlier by Mike Johnson of PWInsider that the Raw Star is now out of contract. It was stated last week that she would be leaving the company in August. This means that Sane might work for the company without full time contract until she departs. WWE have shown recently that they are willing to allow stars to work without contracts with Rey Mysterio not being able to nail down a contract with the company as of yet. It is likely that Sane will finish up with the company after SummerSlam but we will need to wait and see if she is included in any storylines.

Sane made an appearance at The Horror Show at Extreme Rules last night. She appeared backstage to give some moral support to Nikki Cross prior to her Championship match with Bayley. Sane then appeared later in the event in the Corner of Asuka’s match against Sasha Banks. It will be interesting to see if she will appear on tonights episode of Monday Night Raw

Sane appeared last night at The Horror Show at Extreme Rules. She first appeared backstage giving a pep talk to Nikki Cross and then later in the corner of Asuka for her match with Sasha Banks. We will have to see if she appears tonight on Raw.