Elias and Baron Corbin have been continuing a feud since before Wrestlemania. WWE has announced today that Elias has suffered injuries due to a beat down that Corbin gave to him on last weeks episode of Friday Night Smackdown.

It was revealed that Elias has suffered broken fingers as well as a bruised larynx. The injuries were disclosed on The Bump:

During the attack on Smackdown, Corbin went on all offense slamming Elias all over backstage arena before using his King sceptre to hit his throat. The segment ended with Elias uncontrollably wheezing while lying on the floor. WWE believes this is where the injury occurred. 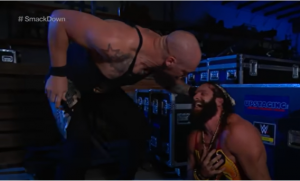 Elias’ whole gimmick is playing the guitar and singing to crowds, so it will be interesting how this is played out with his voice damaged and fingers broken unable to play the guitar.