Last night fans were due to see Apollo Crews defend his United States Championship against MVP at The Horror Show at Extreme Rules. 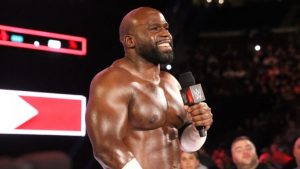 However, it was announced on commentary that Crews was unable to compete due to an injury at the hands of MVP and Bobby Lashley.

In the ring at the event, MVP announced that due to forfeit he would now be crowned United States Championship. Check out the video below:

There is now a bit of confusion regarding who is actually the United States Champion. On the WWE website, Apollo Crews is still listed as Champ.

While WWE explained Crews’ absence was because of an injury, there has been new reports indicating that he was not present due to COVID-19.

Dave Meltzer reported on the latest Wrestling Observer Radio that the reason Apollo was absent was linked to the Coronavirus. It is important to note that he did not confirm that Crews had tested positive for COVID-19.

Some fans have criticised WWE for not announcing sooner that Crews would not be included in the pay per view. However, it is entirely plausible that Crews did not know right up until the very last minute. With the previous problems regarding the virus, any indication of symptoms or being anywhere near someone who has tested positive stars should stay away from the Performance Centre.