A little over a month ago, it was revealed that former Universal Champion Bray Wyatt and his girlfriend, former WWE ring announcer JoJo Offerman welcomed their second baby to the world. This explained Wyatt’s time off after Money in the Bank pay per view. 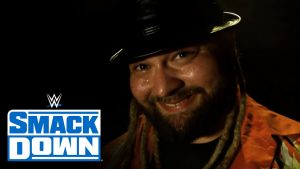 Bray Wyatt is set to face the current Universal Champion Braun Strowman in a Swamp Fight at the Extreme Rules Horror Show pay per view next week. Up until now Wyatt has not appeared at the Performance Centre for quite some time now and it seems the likely reason for this has been revealed.

Tom Colohue of Sportskeeda took to Twitter to report that Wyatt has been filming content to promote his upcoming match from his own home. He said that he is worried about the health and safety of his family if he were to travel to the Performance Centre every week.

Colohue also explains that as the upcoming match against Strowman at Extreme Rules is of a cinematic nature, it means that extra Coronavirus precautionary measures can be put in place to make him feel more at ease.

Bray Wyatt hasn't been to the Performance Center in well over a month now and I've been told he's filming at home.

Extreme Rules being cinematic allows for extra safety measures. Apparently Wyatt, quite rightly, is concerned for his children.#WWE #SmackDown

With so many positive COVID-19 tests at the Performance Centre and WWE’s relaxed methods of controlling the virus, it is fully understandable that Wyatt and many other athletes are taking it upon themselves to stay safe.