WWE stars have been considering taking some time away from WWE alongside Sami Zayn and Roman Reigns, this is following the news that another member of the company tested positive for Coronavirus this week.

The first of those stars may have just revealed themselves without making a public comment. A Former Universal and United States Champion did not attend yesterday’s set of WWE recordings at the Performance Centre. 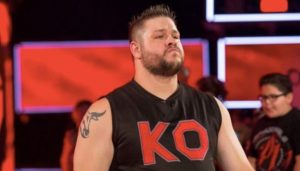 It is being reported by Fightful Select that Kevin Owens, who raced Angel Garza on Raw just this week has told WWE that he does not fee comfortable appearing at tapings at the Performance Centre as a result of a positive COVID-19 test.

From the reports it is also stated that WWE have been respectful of Owens’ decision and the company did not try to convince the star to record the episodes against his wishes.

Fightful Select was able to confirm this afternoon that Kevin Owens did not attend today’s WWE Raw tapings. We were told early Wednesday that Owens had communicated to WWE that he wouldn’t be at the next Raw taping after news of the latest COVID-19 test within the company emerged. It was also said that WWE didn’t try to pressure Owens into attending, and there were no issues on the surface with him opting to not participate.

Those that we spoke to in WWE said there was no heat on Owens that they’d heard of, and word was that he expressed his decision respectfully. They’re hoping to have him back by the next set of tapings, but that status is unclear.

On Wrestling Observer Radio, Dave Meltzer added why Kevin Owens refused to tale part in the tapings and gave information as to how long he would be out.

“Kevin Owens will not be on this coming RAW because he opted not to stay — he lives in the area, but he decided not to come. They were told that if you don’t want to come you don’t have to come and his wife’s grandfather just passed away from COVID like within the past couple of weeks so the family was concerned obviously with him working with someone who might have COVID in the building. My impression is that he will come back on the 29th so I think he’s just going to miss one week.”

WWE episodes were set to be recorded on Monday, however once the news came out about the positive virus test the tapings had to be postponed while everyone within the company had to be tested for COVID-19.

Not all tapings were able to take place in the short time due to staff waiting on results from testing.