On this week’s episode of Friday Night SmackDown we seen NXT superstar Matt Riddle make his debut in the main roster. He successfully took down Intercontinental Champion AJ Styles in an entertaining match. Luckily for Styles, it was not a Title match. 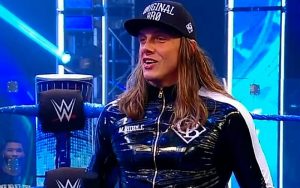 WWE fans are hoping that the victory over the Wrestling legend is a sign of things to come for Riddle. Allegedly, management within the company reportedly have big plans for him in SmackDown.

Matt Riddle was an MMA fighter before transitioning to pro wrestling back in 2014. He was signed to UFC but was released by Dana Wight for testing positive for marijuana on two separate occasions.

Riddle recently spoke to Ariel Helwani of ESPN in an interview. She asked if he still smokes marijuana while working for WWE, here is his response:

“You know what, I don’t really, I don’t like to talk about that. You know, with the WWE and stuff like that?

“I’m a supporter of it, you know, it’s medically legal in most states. And I know most companies, aren’t you know, punishing people [for it] anymore. I know since my stint with WWE I’ve had no problems. You know they understand my situation, they know I’ve fought in UFC, they know I’ve had multiple surgeries, they know I bump all around the ring and I take damage and everything else and I’m 34 years old.

“And as long as I am not hurting anybody or doing anything they make sure they test me all the time. They know everything about me. They test us for everything all the time. So its like, you know, I’m well taken care of and I’m good. They understand who the Bro is.”

WrestleVotes, an extremely reliable Twitter source, revealed that Matt Riddle is not the only one who occasionally likes a bit of weed. According to one of their sources within WWE, over 70% of the roster use marijuana in some form.

Riddle’s SmackDown debut this week must have been one of the high points in his career. its not been an all perfect week for him however with accusations by an independent wrestler that he sexually assaulted her. Both Riddle’s attorney and WWE have recently released statements. WWE said they would investigate the matter; his lawyer denied all allegations on his behalf.