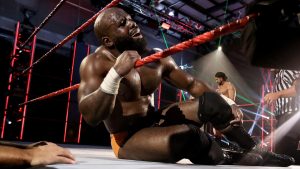 WWE have announced that Apollo Crews was out of the Money in the Bank ladder match next weekend after sustaining an injury. The statement came from the company shortly after last night’s Monday Night RAW show.

Apollo Crews suffered a knee injury that left him unable to continue in his United States Championship Match with Andrade on Raw. Due to that injury, Crews will no longer be able to compete in the Men’s Money in the Bank Ladder Match on Sunday, May 10.

Crews faced Andrade earlier in the night in a six-man tag match and was then granted a singles match for the US title after an altercation with Andrade backstage.

In the match, Crews appeared to suffer a knee injury which got worse when he jumped from the top rope. This caused the match to be cut short due to Creed not being able to continue.

It is still not completely clear whether this injury is genuine or whether its going to be part of the story line.

How this will play into the ladder match going forward is not clear, but Crews could perhaps return to challenge Andrade for the US title after Money in the Bank, as it was the champion who put him out of action.