Through social media today we were informed that a WWE SmackDown star is going to get a chilling revamp to her character. 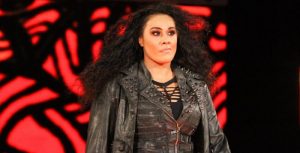 We last seen Tamina Snuka at Money in the Bank where she got defeated by Bayley for the SmackDown Women’s Championship. In the extremely creepy video on Twitter, Tamina seems to have snapped. Check out the video below if you are brave enough:

After my devastating loss at #MITB and 10 years of being used and abused it has finally happened…..”The Trepidation”.
.
.#WWE #SmackDown #SmackDownLive #Raw #BackLash #Tamina #Cracked #NobodyNicer #NobodyMeaner pic.twitter.com/G09fWyasqK

Tamina made her debut in WWE over a decade ago alongside the Usos. In the ten years she has been with the company she has not won a title other than the 24/7 Championship. She won the Title at Hell in a Cell last year but lost it at the same pay per view event.

She has picked up a couple of victories on Tv in the past couple of months as she was building up to her title match against Bayley but as mentioned earlier, she lost and has not been seen since then.

Is the loss and lack of title the reason as to why she has clearly lost her mind in the promo? The sinister character change could give Tamina the push she truly deserves and will maybe help her get another title shot soon.