John Cena is a class act that has helped the lives of many incredibly sick children during their darkest days. Despite what people think of his in-ring performances, or the massive push that the company has given him over the years, wrestling fans can agree that Cena goes above and beyond when it comes to fans.

While the world may be on lockdown due to the global Coronavirus pandemic, John Cena has not stopped working to help those who are battling incredibly harsh illnesses.

Despite USA being on lockdown, the sixteen-time World Champ was still able to surprise a young fan. David Castle aged 7 from Florida is dealing with Wilms Tumour, which originated in his Kidneys. 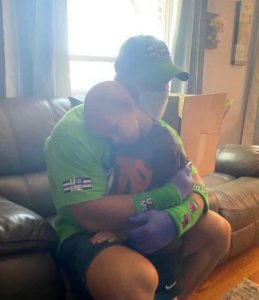 Young David opened his door to the surprise of Cena wearing his full ring gear, face mask and gloves. He gave young fan a goody bag that included WWE merchandise, including two replica belts and signed memorabilia. Cena then spent time with the family and even had time for hugs at the end

No one has granted more wishes. And a pandemic won’t stop him.

It is amazing to see that while the world is on lockdown right now, John Cena was able to take time to help children and families who are going through a horrendous time at the moment. We should all aim to be a bit more like John Cena