It is being reported that in last night’s episode of Friday Night SmackDown, WWE took an intentional shot at AEW’s Executive Vice President Cody Rhodes.

During the episode there was a weird segment that featured Naomi, Lacy Evans, Tamina and Dana Brooke. For no reason at all the four women had to take part in a karaoke contest. 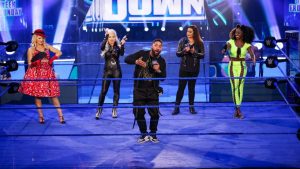 As part of the strange competition, Naomi sang the entrance music of Dusty Rhodes the WWE Hall of Famer. Dusty is obviously also the father of AEW’s Dustin and Cody.

Ringside News is reporting that this was a shot by WWE aimed intentionally towards Cody in particular.

We've been told that Dusty Rhodes' "Common Man" song didn't appear on SmackDown by accident at all this week. It was totally on purpose, so those "conspiracy theorists" were right about this one 🙂