After Cody became the first TNT Champion at AEW, he set out a challenge on Dynamite. It was an open challenge to pro wrestlers regardless of the promotion they are in. one of the first people who benefitted from this was Eddie Kingston. 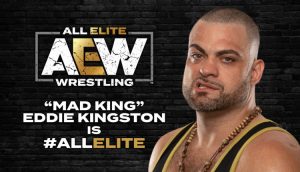 Kingston made his debut on July 16th to challenge Cody for the new strap. Although he was unsuccessful, Kinston did manage to win himself a contract with Tony khan’s promotion.

Kingston has now revealed that WWE tried to swoop in and sign him after his AEW debut. He recently appeared on Talk is Jericho, during the interview he discussed that he was previously offered a coaching role at the Performance Centre. After seeing him in the ring with Cody, WWE offered him a contract.

“Christopher Daniels… he calls me up. He goes, ‘Hey man, we want to bring you back.’ I said, ‘Yeah, sure.’ Again, just a booking, at the time I’m thinking. I come in, I get a call from the competition. To be honest to them, they were trying to get me to coach for years. But my thing was and I told them, ‘I can’t collect a paycheck if I didn’t earn it.’

And they were like, ‘What do you mean?’ My thing was I was gonna go in there, coach, be bitter and angry about coaching, not getting a shot. And these guys, they love wrestling now because they’re at the Performance Center, no offence to them… I would have been so bitter and angry I wouldn’t have done a good job and I would have been detrimental to those kids. So, I was like, ‘No, I’m good.’ So anyway, now they were talking about other things besides coaching.

Kingston has now signed a deal with AEW and has recently formed his own faction. He came out to stop The Butcher, The Blade and Lucha bros from arguing with each other. Now all of them seem to be working together. We will see them all involved in the Casino Battle Royal at All Out this weekend